Ok, I don’t know much about the music industry, but there is such as huge disparity between what the record labels say and just about everyone else, it’s difficult not to comment. I think that’s probably because their business is over. I’m not even someone who participates in online music sites, these comments come from watching Internet businesses.

Historically, the major record labels have been the gatekeepers. People would listen to a few bands on a few radio stations, and the choice of music was finite. New bands come and go, but pretty much at the whim of the labels. Popular bands (Beatles, U2 etc.) would make the record labels huge amounts of money, and many other (no so popular) bands would benefit from record label support.

The record labels controlled the distribution (records, CDs etc) and generally kept rights to things, so they maintain control.

If you think about the general spending on different bands, it’s been something like this (please excuse my poor drawing skills): 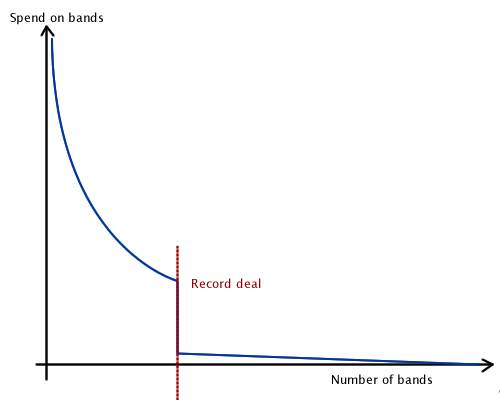 Now, I don’t know the actual figures, but both of these must be logarithmic scales, as a few top ‘artists’ make mega bucks (Black Swan style), and there are many who do it for the love of music and gigging.

The main changes since the CD heyday have been:

What hasn’t change is the record labels, especially in the US, where the RIAA prosecutes consumers: the music industry spent an estimated $1M to prosecute just one of the millions of individuals who use file-sharing software. The futility of this approach is obvious.

The future for record labels seems bleak, and I’m not convinced that even with radical change they would survive.

The future of music distribution

Looking ahead a few years, the role of the record label could be replaced by a marketing function with minimal infrastructure. Internet distribution, on-demand printing of t-shirts, books and even CDs means that scaling from 5 bands to 5,000 bands would be (relatively) easy.

Imagine a site similar to MySpace, but purely aimed at being a music community. A site where bands can sign up for free, create some pages, upload some tracks, upload some designs for t-shirts, and put in their gig dates. The site provides blogging for the musicians, for the end-users it provides forums, sharing of ratings and new music recommendations for end-users. (last.fm does this well.)

The band can select a few give-away tracks, and the others have pre-view clips with purchase buttons next to them. The purchase has to be super-easy, going straight into your music collection.

The people running the site keep an eye on the incoming bands, making sure the right people know about new bands, and taking a cut of all the outgoings. They concentrate on giving the bands a good platform, and the users a great way of finding the music and musical events they are interested in. At this point, the share of money going into music could be much more evenly distributed:

I wonder who will be the first to create this type of site? It could be the current labels, there are moves in that direction. It seems unlikely though, they are too entrenched in scarcity thinking.

The massive stumbling block for anyone else is all the artists who are currently signed up. I suspect that the copyright issues would prevent any currently signed band from moving to a completely online model. Sites like Last.fm and services like Spotify have made the listening and finding aspects much, much better. However, they still have to play by the label’s rules, and probably aren’t able to create the sort of music services I’m thinking of.

Another consideration is that ‘music’ is probably too wide for a reasonable online community, it might be that there are site(s) per genre, even if they are simply white-label style differences.