Unusually this is not an accessibility post, it is a home cinema/TV thing. If you have a good OLED TV and surround-sound system, this may be relevant.

I love good films and TV, and I have a middle-age wish to watch (and listen) to the best versions of the current cultural stories that I like.

I have been going through a process of introducing my kids to my favourite (kid friendly) movies. I want them to look and sound good in comparison to modern films. I also need to store local digital copies on a Plex server so the kids don’t mess with the physical copies! I’m not claiming to be an expert, these are my observations from a lot of experimentation.

There is a large variation between the visual quality of what you watch, which I’d categorise as:

The “HDR” bit is worth expanding on, because the general consensus is that good contrast beats sharpness (resolution). That’s what the human eye is evolved to pick out, and having had a 4k non-HDR TV for a couple of years I have to agree with that. I now have a Panasonic OLED TV which has excellent contrast compared to the LED TV I had before.

Whilst swapping to the new TV, I took a very quick picture with my phone. Even with a phone picture, the OLED TV (in the foreground) looks much better than the LED TV. 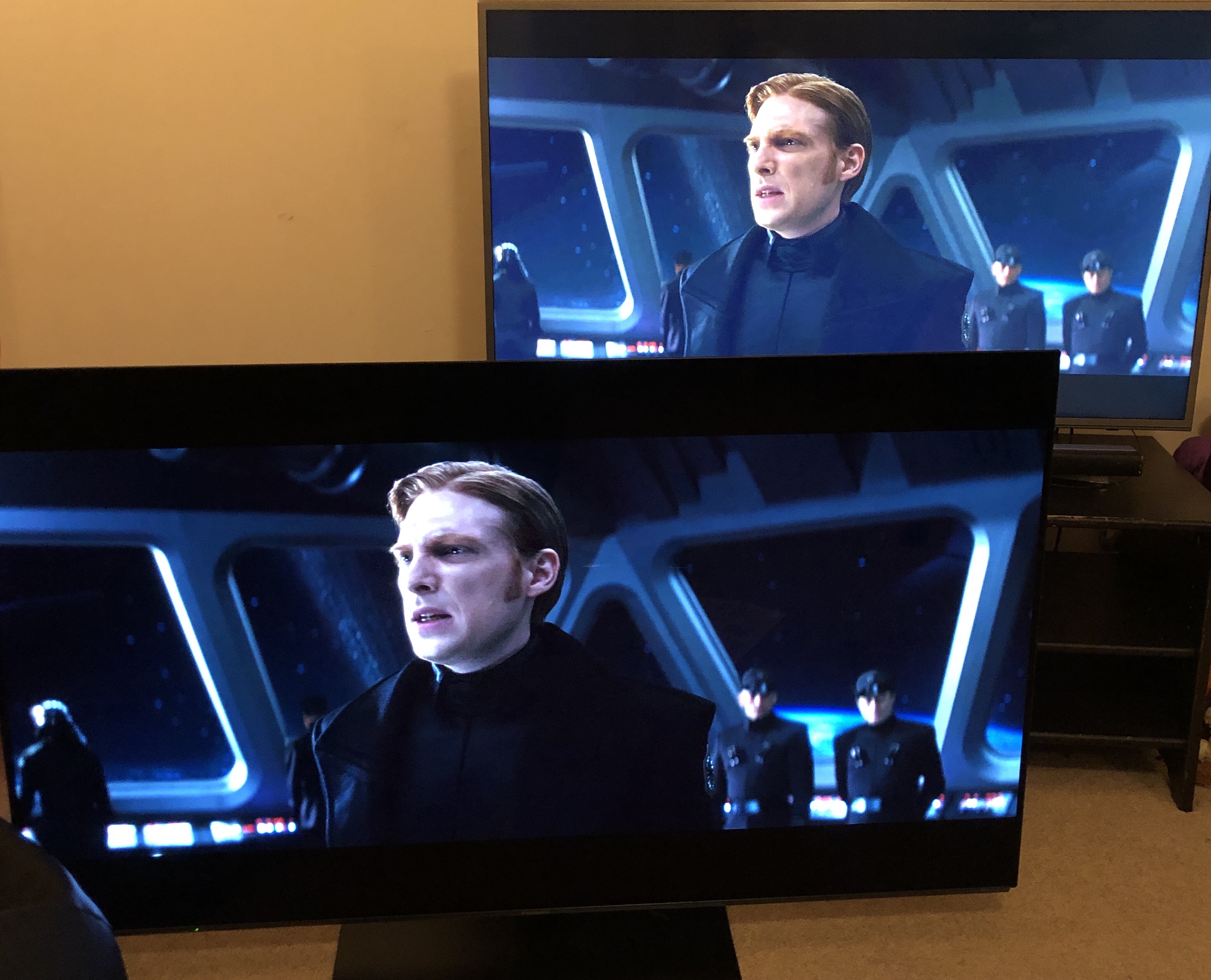 With a reasonable quality television (which up-scales lower resolutions) playing a DVD can look very similar to a Blu-ray or other high-quality source.

When you buy a DVD, Blu-ray or 4K Blu-ray the quality of what you see depends very much on how it was transferred. With a modern TV and player that up-scales the resolution, what makes the visual difference is how clean the transfer is. For example, if you get a recently transferred 4k copy of Back to the future (in 4k or standard Blu-ray) it is a clean copy that looks great and compresses well if you make a local digital copy.

Conversely, I got a 4K copy of “They live” which is a classic 1980s movie, but the transfer to digital seems less ‘clean’, and it is hard to tell the difference between the 4k version and the standard Blu-ray, or even DVD.

If you copy an older Blu-ray to MKV/MP4 the lack of quality is very noticeable because there is a ‘grain’ in flat areas, such as the sky. It’s just a pattern of dots that fluctuates back and forth in those flat areas of colour, not very obvious when watching the disc at full quality but it adds a massive overhead for digital copies. A 4k version just means finer grain, but it is still there. With a good quality transfer it doesn’t matter whether it is HD or 4k, it looks good on a modern TV and makes a much better digital (compressed) copy.

If I rip a blu-ray to store locally for my Plex server, I check the ripped file for this grain effact and adjust the quality settings on Handbrake quite a lot. A modern film can convert at a quality setting of 22 and produce a small file (under 5GB), but for older films I’d add the ‘film’ filter and reduce the quality to 24 or 25. That smooths out the grain effect. Otherwise you get a >10GB file that looks patchy.

The other main difference can be the HDR aspect, where the bright areas are brighter, and the range of colours are better. You really need a close side-by-side comparison to see the difference though. If you have an OLED TV it already has good contrast and can make the best of a lower resolution (or lower contrast) source.

What I have discovered fairly recently is how much I appreciate good sound. For home viewing I’ve gone from TV speakers (pre-2005) to a valve amp with good stereo speakers, to a JVC soundbar (~2010), to a Sonos Arc with “sub” in 2020.

There is a large variation between the audio quality of what you watch, the main categories of source are:

To me the audio quality is a more obvious a difference than the video quality. Your hardware is like a ceiling, whatever the best audio you can get from your hardware defines the ceiling of what you experience. The source material can vary, but only up to that ceiling. Up-scaling audio quality does not seem to be a thing.

For example, I switched from a downloaded 1080p (stereo) version of “Raiders of the Lost Ark”, to the DVD (720p), and it was better quality. The apparent resolution was very similar due to the upscaling, the frame-rate was better (no stuttering), and the audio was much clearer. The 5.1 output from the DVD, via the Xbox with Dolby app, is much better than the compressed stereo you generally get from a downloaded copy.

With the Sonos Arc + Sub, I have a super-clear ATMOS capable sound system. It doesn’t magically make sound come from anywhere in the room, but it does three things I notice:

I am seriously considering getting a couple more Sonos speakers to add audio to the sides/rear, but I’m very glad I went with the sub first.
Update: I got the rear speakers, and now it does mean sound can come from all around you, things can come from your right/left as well as behind. It’s really good for things like crowd scenes, where the atmosphere is all around you, but the characters speak from in front of you.

However, having a good quality sound system makes regular audio terrible (e.g. a news broadcast from standard TV). You have to use the “improved speech” setting in the Sonos app or it blends in with the background. A good quality source is great, but a low bitrate/quality source blends the sound together and undermines the speakers.

With my setup the best quality audio and video is, in order of apparent quality:

It is interesting comparing the Xbox and Apple TV. With the Apple TV there is a harsh line between Atmos and Stereo on the Sonos. If the video is not encoded with Atmos it is just stereo. You can fiddle with the settings to pass-through the audio and get 5.1 surround, however, I found that killed off Atmos for a lot of content.

However, the Xbox (with the Dolby app) will always trigger the Atmos setting on the Sonos Arc. A non-Atmos source isn’t as good, but it is better than the Apple TV non-Atmos sources, it usually comes through as surround-sound. For some reason Netflix provides the high-quality audio when going through the Xbox, but not with the Apple TV.

Generally on a Blu-ray you’ll find it has either: Atmos, TrueHD, or DTS of various forms. The first two are Dolby based and supported by Sonos, but anything with DTS (e.g. DTS-HD MA) will just come through as stereo when ripped to an MKV. Blu-ray players (like the Xbox) automatically transcode the audio into something compatible, but I haven’t found any players for digital files (including the Xbox) which do that for MKV files.

If you want the best audio for a ripped Blu-ray on your Sonos Arc, I’d recommend these settings for Handbrake depending on the source:

The “Auto-passthru” for Atmos or TrueHD will account for 2-4GB of the resulting file, but it’s worth it. The E-AC3 will be under 1GB, and it comes through to the Sonos as Dolby Digital 5.1.

For maximum compatibility I often use both, so a primary track of Atmos and a second track of E-AC3in the MKV file.

Also, be careful to limit the bit-rate to 960 for E-AC3, otherwise you can get a very strange effect where each 3 second section of sound is reversed, which is un-listenable.