I noticed something in the browser stats before I noticed it on my laptop – Google’s Chrome doesn’t ask you about updates. I knew, almost subconsciously, that there was a Google updater programme running. However, I didn’t realise the impact it could have on web development, and potentially users as well.

A small part of StatCounter’s Global statistics for browser versions caught my eye: 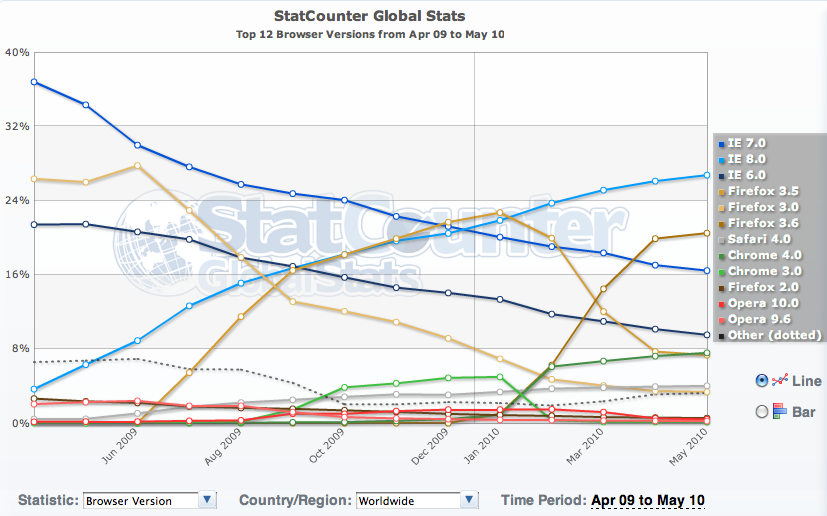 You might remember from Jacob Neilson’s Alert Box that we were stuck with old browsers for three years:

With IE6’s plateau, it seemed like things were getting worse. Even Firefox (with more tech-savvy users, we assume) is taking the better part of a year to drop under 5% from the release of a new version.

But now there is a new browser in town, with a web application perspective. Let’s zoom in on Chrome, when it updated from Chrome 3 to 4. Light green is 3, dark green is 4:

As a web developer: This is fantastic! No more waiting for users to download, they don’t even need to think about it. I don’t need to worry about having multiple browsers installed, because the general population can’t use old versions.

As a user: It’s great… until it breaks. Taking the choice away about when to update a program strikes me as dangerous.

The potential danger is very limited at the moment because Chrome is not bursting with pluggins and isn’t relied on by anything else. However, pluggins are becoming more popular, and upgrades that break web-apps could be a new problem.

We know how well Microsofts upgrades are received when they break things, if Chrome carries on gaining market-share, is it risking the same issues without even giving people the choice of when to update?

This is a consistent approach from Google, the update from 4 to 5 happened just as quickly:

The line that chrome overtakes in July is IE6 by the way, so Chrome 5 is more popular than IE6 now.